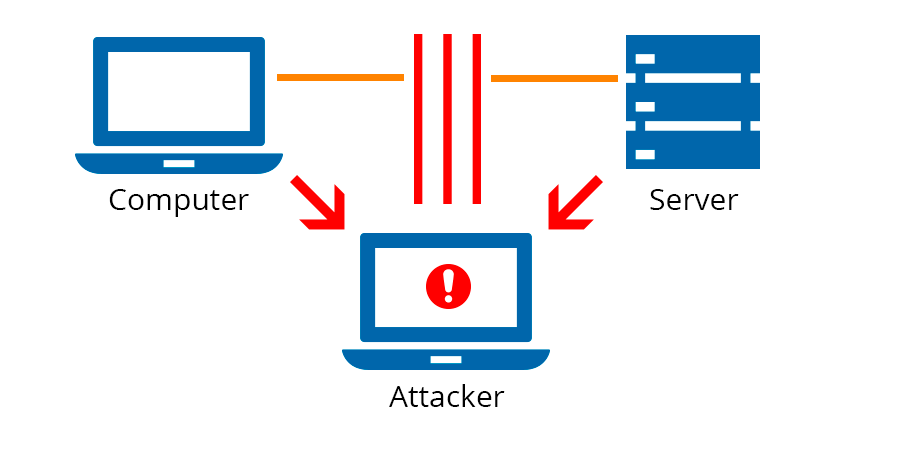 For eg. Data is sent from point A (computer) to point B (server/website), and an attacker can get in-between these transmissions.

They then set up tools programmed to “listen in” on transmissions, intercept data that is specifically targeted as valuable, and capture the data. Man in the Middle Attack can happen in any form of online communication, such as email, social media, web surfing, etc.

Not only are they trying to eavesdrop on your private conversations, but they can also target all the information on your devices.

The most common (and simplest) way of doing Man in the Middle Attack is a passive attack in which an attacker makes free, malicious WiFi hotspots available to the public.

Typically named in a way that corresponds to their location, they aren’t password protected. Once a victim connects to such a hotspot, the attacker gains full visibility to any online data exchange.

A newer variant of Man in the Middle Attack has been gaining popularity with cybercriminals due to its ease of execution. With a man-in-the-browser attack, an attacker needs is a way to inject malware into the computer, which will then install itself into the browser without the users’ knowledge, and will then record the data that is being sent between the victim and specific targeted websites, such as financial institutions, that are coded into the malware.

Once the malware has collected the specific data it was programmed to collect, it then transmits that data back to the attacker.

Connection Susceptible to Man in the Middle Attack

How to Prevent  MITM